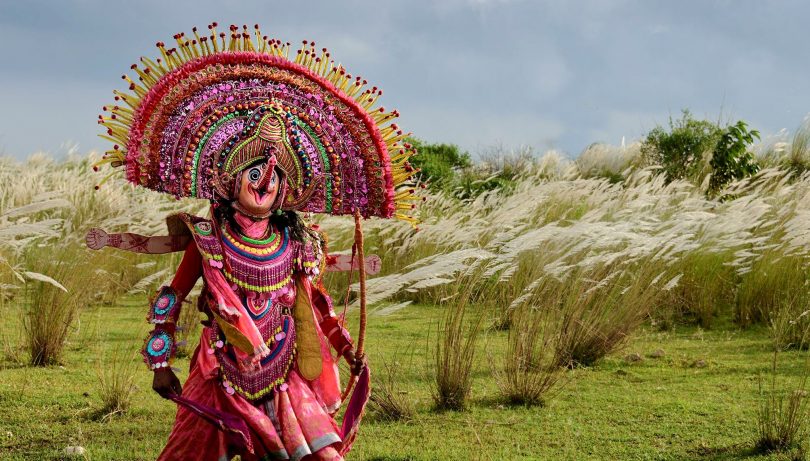 There are many neoclassical dances and drama dance like Kathak, Odissi, Bharatanatyam, Kuchipudi, Kathakali etc. Chhau Dance is the rare mask dance of eastern India region which is a unique form of dance.

In the first place, the eastern India origin Chau dance is an Indian semi-classical dance. The tribal and other common people in the tribal belt perform this dance.

To tell the truth, it has traditions of folk, martial and tribal embedded in it. The performances are different in their styles at different locations. The names of these dances arose from where they originate, namely the Seraikella Chau of Jharkhand, the Mayurbhanj Chau of Odisha and lastly the Purulia Chau of Bengal.

The range of this dance differs from different activities like acrobatics, athletics and martial arts. Moreover, they perform it in themes of the festive season of folk dance. The basic structure of Chau dance is different religious themes such as Shaktism and Vaishnavism and Shaivism and etc.

The costumes from Serakeilla and Purulia vary in the form of using masks for identification of the characters used in the dance. The Chau dancers depict the stories of Hindu epics such as the Mahabharata, the Ramayana, the Puranas and also some other kinds of literature.

All male troupes do this dance traditionally and celebrate regionally during each year at the spring and monsoon season. The Chau dance is an amazing dance which gets people close together from different social and economic backgrounds. They all come for a religious and festive spirit.

This dance is one of the folk dances of the Rarh area. They perhaps derived the characters from the Chaya(mask or image or shadow) in Sanskrit. SitakantaMahapatra suggested that in Odia language perhaps Chhauni (armour or stealth or military camp) is perhaps the basic source of this dance.

Generally, the tribal folk of West Bengal, Odisha and Jharkhand, perform the Chau dance during the festivals, namely the Chaitra Parva or the Spring festival. The whole local tribe participates and celebrates this festive occasion.

To tell the truth, masks play an important and integral share of Chau dance of Purulia as well as Seraikella. The artists and the participants all wear the mask at the time of dance, but, in Mayurbhanj Chau of Odisha, the artists use these masks at the time of their first introduction with the audience and they dance without masks.

They blend styles of both the dance as well as a martial art and employ artificial war techniques (which is called Khel).

They also show conventional styles of various birds as well as animals (famous as the topkas and the chilis). Moreover, they also show varieties of movements of the tasks of housewives of the villages ( uflis).

Most importantly, this type of dance form does not bear any sort of sacred or traditional meaning. It is only a form of party and the entertainment for the tribal community people.

The male dancers perform it mostly at night and in some open areas-the akhada or the asar. Actually, this dance is musical and based on old-fashioned popular music. They play it on the stem cylinders like shehnai and mohuri.

Added to this, various drums go along with the music collaborative. They include the dhumsa (a big pot like a drum) and dhol (a cylindrical barrel), and chad-chadi or kharka.

Moreover, these dance themes include not only various chapters of the epics- the Ramayana and the Mahabharata and others, but also local legends and mythology.

Most importantly, UNESCO’s representative in their list for the Intangible Cultural Heritage of Humanity inscribed the name of Chhau dance in the year 2010.

In the first place, the Odisha Government founded a dance centre in the year 1960 in Seraikella to patronage this Chau dance along with the Mayurbhanj Chau NrityaPratisthan in the year 1962  atBaripada.

Moreover, these institutions employ and involve local gurus and artists and fans and agents of Chau dance for training purposes and sponsor their performances.

Most importantly, UNESCO had listed Chau dance of Purulia in their list of heritage dances.

To tell the truth, the key difference of the Chau of Odisha and Purulia is in the masks that they normally wear and use.

While Purulia Chau dance wears the mask at the time of the dance. Whereas Odisha Chau dance does not wear the mask and they show facial look along with their gesture and body movement.

Traditionally and normally, the Chau dance is held every year in the middle of March, mainly to celebrate ‘ DollUtsab’, when one circle of agricultural ends and a new one will begin.

In fact, Chau dancers of Purulia wear the theatrical mask to represent various mythological characters. First, they make the outline of these masks with clay.

Then they color them and decorate it with mainly Shola and a few other things. Besides this, in the Geographical Indications lists, there is the enlistment of the exclusive and traditional masks of Purulia.

Moreover, artists of the sutra dhar community make these chhau masks. They complete the mask making through several phases, which are mentioned below:

In Seraikela, this dance is the Seraikella Chhau and it has a present headquarter administration at the Jharkhand SeraikelaKharsawan district.

The other two forms of Chhau Dance are the Mayurbhanj district of Odisha’s – MayurbhanjChhau and Purulia district of West Bengal’s – PuruliaChhau.

In the PuruliaChhau, there is extensive use of masks and the shape of these masks are in accordance with the characters of the dance.

For example, the person who is playing the role of a lion character in the dance along with body costumes wears a face mask of the lion. The actor or dancer has to walk on all the four since the role he is acting is of that type.

The nobility erstwhile of Seraikella developed the SeraikellaChhau’s dance technique. Here, they developed both the choreographers and performers while in modern times, people from all backgrounds participate in this dance.

The SeraikellaChhau dancers performed with masks that are symbolic in nature to the role the actor that they are playing. The acting done by the actor is established by the role he is playing in the dance.

The Mayurbhanj Chhau dance performers generally performed without masks and are very much similar to the dance of Seraikella Chhau.