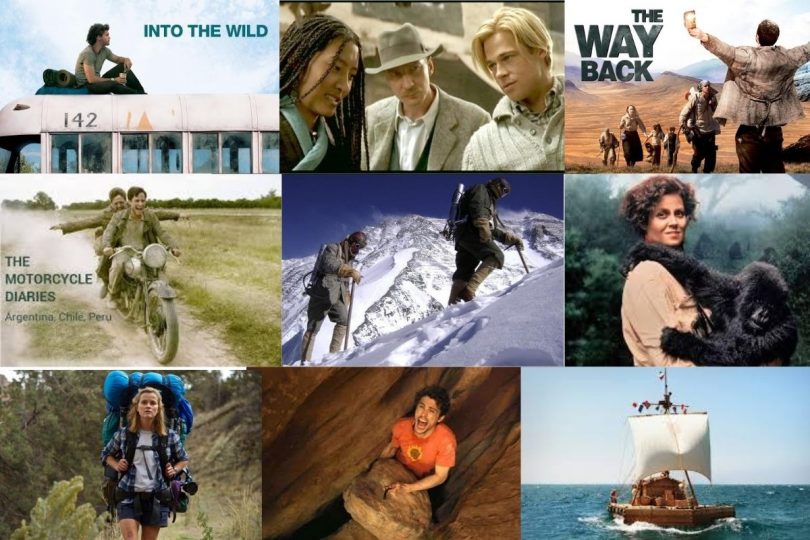 How many of you were inspired to explore a new place simply because you’ve seen it in a movie? Movies have a way to get the world onto our TV sets. They can be inspiring, motivating and they can make us want to go out and travel the world. To inspire your wanderlust, here are 13 Real-Life Adventures Travel stories that may inspire you to travel more

It’s a real-life travel story of 22-year-old Christopher McCandless. After graduation, he left his bright career ached of him and went into the wilderness in search of adventure. He transformed himself and became the inspiration of lots of people. Was Christopher McCandless a brave wanderer or a Stupid idealist? An insubordinate 1990s Thoreau or another lost American child, an adventurer, who grappled with the precarious balance among man and nature? McCandless’s mission took him from the wheat fields of South Dakota to a maverick outing down the Colorado River to the non-traditionalists’ shelter of Slab City, California, and beyond. Along the way, he met different kinds of people with a different character which shaped his understanding of life.

This film is based on a biographical book “The Long Walk “written by slavomir rawicz. 7 prisoners of a Soviet Union labor camp, break away their Siberian POW camp and start a treacherous journey walked 4,000 miles (6,400 km) to freedom through hostile antagonistic terrain.

The film TRACKS, which recounts the real-life travel story of Robyn Davidson. A young lady who leaves her life in the city to make a solo trek through right around 2,000 miles of the rambling Australian desert. She started her journey with her dos and for camels which she earned in a camel firm. Along the way, she meets National Geographic photographer Rick Smolan who documented her journey.

Gorillas in the Mist

This film is based on the biographical book of naturalist Dian Fossey.  A physical therapist from Kentucky Fossey is inspired by famed anthropologist Louis Leakey to devote her life to the study of Gorillas in Africa. Fossey gets entranced with the lives and habits of the rare mountain gorillas of the Ugandan wild. She is so dedicated to “her” mountain that she refused to go with his boyfriend who was also a National Geographic photographer who was documenting her work. She was trying to stop poaching of gorillas. Gradually she became an animal rights activist, make some enemies in that area. Probably that is the reason for her death.

127 Hours’ is the real story of Ralston’s extraordinary journey as a mountaineer to save himself after a falling rock breaks his arm and traps him in Utah in loneliness. For the next five days, Ralston explores his life and survives the elements to eventually discover that he has the strength and the resources to extricate himself by all possible means. Ralston remembers friends, wives, relatives, and the last two people he ever had the opportunity to encounter during his journey?

“The Motorcycle Diaries” is a wonderfully crafted story. It shows the dawning of the social consciousness of one of the most charismatic revolutionaries of the 20th century. The best film to date by Brazilian director Walter Salles shows how an eight-month trip across South America in 1952 changed the minds of 23-year-old Argentinean medical student Ernesto Guevara who emerged as the revolutionary Che a few years later. Based on Guevara’s books and traveling friend Alberto Granado, this smartly drawn image is imaginative. Acquired by Focus Features for US distribution shortly after its rapturous world premiere at Sundance Film Festival.

In 1985, two young climbers, Joe Simpson and Simon Yates set off from the Peruvian Andes to ascend the dangerous west face of the Siula Grande. They were professional climbers and climbed “Alpine-style” without setting up ropes or base camps ahead of time. Ascending the mountain in “one great push” We reached the summit (21,000 ft.) on the third day after coping with a snowstorm.

The descent down proved much harder. Simpson fell badly and broke his leg. Yates planned to try to lower Simpson down the mountain, one rope section at a time of 300 feet. The climbers had run out of gas to melt snow, and as night came, they couldn’t risk stopping in a violent blizzard. Their slow, plodding trip reached a hurdle when Yates accidentally dropped Simpson over a cliff’s edge. Throughout the wind, the men couldn’t hear the cries of each other, and Yates, unsure about Simpson’s location. And slipping slowly down the slope himself decided to cut off the rope that bound them, sending Simpson plummeting to death.

Vain Heinrich, a renowned Austrian mountain climber who leaves behind his spouse and infant son to lead an expedition to the Himalayas in 1939, ended up as a prisoner of war in the hands of the Allied powers. He and a fellow prisoner, Peter Aufschnaiter (David Thewlis), make their way to the Forbidden City of Tibet. Where Peter meets a wife and Heinrich gets to know the young Western culture-obsessed Dalai Lama. While Heinrich awaits war, his friendship with the Dalai Lama is starting to turn him from haughty to modest, but a crisis is looming with China.

Wild shows off Cheryl Strayed’s real-life travel adventure story. She lost her mother to malignancy at age 22, followed by some unexpected circumstances. Similar to her marriage breakdown, separated from her children, and addicted to heroin and sex. A few years after the fact, Cheryl is deciding on the imprudent decision of hiking the Pacific Crest Trail. A 1,100-mile climb across America’s West Coast. Without any experience of long-distance hiking, desire to get away from all the stuff that had ruined her heart. Cheryl is setting out on a course that sees her life change. Wild is a tale of the physical test and deep revelations while strolling along with one of America’s largely celebrated and excellent climbing trails.

A Walk in the Woods

In this adventure film is the story of legendary travel writer Bill Bryson. He instead of retiring to enjoy his loving and friendly wife and a big and happy family he chose to walk the Appalachian Trail-2,200 miles from Georgia to Maine. It’s  America’s most untouched, scenic, and rugged landscape. But the peace and tranquility he hopes to achieve is anything but because he decides to be joined by the only person he can get willing to accompany him on his long-lost and ex-friend Katz‘s journey. The problem is, the two meanings of the term “adventure” are entirely different. Now they’re about to learn that the real fun begins when you push yourself to the edge

The film examines the obsession of George Mallory becoming the first person to achieve the highest position on Earth. Told through the touching and evocative letters of the adventurer to his wife, Ruth, previously unseen photographs and film archives from 1924 (restored particularly for the film from the original nitrate). Dramatization and a modern-day journey retracing the same route taken in 1924, Mallory’s epic adventure lives on again.

The expedition was led by renowned mountaineer Conrad Anker. His life was inextricably connected to Mallory after Mallory’s body was discovered on Everest in 1999.  Using clothes and tools from the 1920s version, Anker sets out to solve the great mystery of how Mallory succeeded in summiting Everest before he died. When he was last seen just 800 feet from the top until the clouds closed in and he vanished into myth. The most tragic clue All of Mallory’s belongings were found intact on his body. With the exception of his beloved Ruth’s photograph, which he vowed to leave at the top of the world if good.

In 1947, Norwegian explorer Thor Heyerdahl and five men crossed the Pacific Ocean in a balsa wood raft. They wanted to show that South Americans may have crossed the sea and landed on Polynesian islands even back in pre-Columbian times. They set out on an incredible 101-day long journey through 8,000 kilometers. All while the world was watching, after collecting funding for the trip with loans and donations. KON-TIKI tells of the roots of the concept from Heyerdahl and the events surrounding the group’s journey.

Based on a true story, about a challenge to climb the most dangerous rock face of Alps’. In 1936, Nazis used to encourage German mountaineers to conquer the unclimbed north face of the Eiger, the Swiss massif. The climbers, Toni and Andi continue their risky ascent to the famed rock wall, also known as the Murder Wall. Toni and Andi unforeseenly run into Luise, Toni’s early love, while preparing themselves at the foot of the North Face.

Also, read 14 must-read real-life travel storybooks that may inspire you to travel