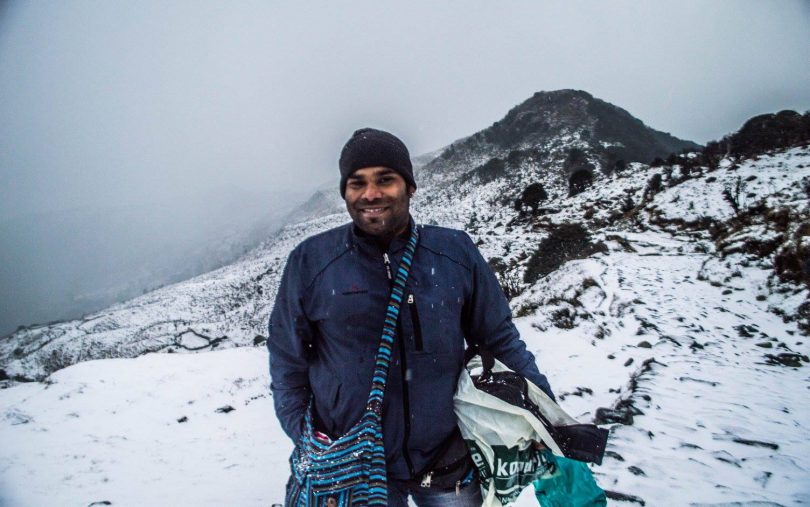 Lots of trekkers started their first trek in Sandakphu trek. Height of Sandakfu is 3636 meters and it is the highest point of West Bengal.

On my Nepal trip I decided to go for Sandakphu trek in December 2014. Usually people love to go there on April-May to see rhododendron. But I wanted to feel the sub-zero degree temperature. I share that information with my friends if they want to join me on this trip and I got a great response. But due to some situation I had to change the time of the journey to January 2015.

Lots of people said it is not the perfect time to go for Sandakphu trek because people usually go for this trek on April-May. Because this is the season of blooming rhododendron. But I wanted to feel the chill of sub-zero degree temperature that I never experienced. People started canceling the trek one by one and at the date of our journey I was the only person left. And I decided to go for my first solo trip.

Start of the journey

I boarded a train from Howrah to NJP. It reached NJP at approx 8.30 am. I took a shared jeep to Darjeeling, it cost Rs 250/-. I bought lots Wai Wai, snacks and some cookies. Then I took another shared jeep to Manebhanjan. It is the place where the trek starts.

I decided to stay in a dormitory to save money, but the problem I was the only person in a 14-bed dormitory. Somehow I was able to convince the manager. The stay at the dormitory cost me only Rs. 100/-.

Then I was roaming around the place with a camera on my shoulder. Suddenly I random guy came from nowhere, and asked me where I was going. I asked if is there any problem. It was almost dark by then, and he said not to go any further because there could be a leopard.

I had my dinner at 7.30 pm and went to my room. I wasn’t able to sleep that early, It’s not my daily routine. Everybody slept, I was alone in a big 14-bed dormitory I had nothing to do, no one to talk to, no book to read and I didn’t have a Smartphone at that time. That day I felt what loneliness is. That may be common for any other solo travelers, but it was the first time for me

I arranged a guide in the morning. It cost me 600 per day for 5 days total 3000/- with dinner at Sandakphu and Phalut. I started my trip at 8.30 in the morning. Yes it is late but I couldn’t arrange a guide yesterday

Most of the people go to Tonglu on Day 1 of Sandakphu trek but decided to go to Graibas on the first day. The hike was a bit stiff at the beginning. I had to take several breaks in the way. I had to take a tea break, and having tea in a small tea shop, feels amazing. It was Mekhma, I can’t remember the exact time, the sunny sky suddenly became dark. And within no time snowfall started. I was walking in the snowfall. I don’t have words to describe the situation. If there is heaven it was there.

We couldn’t reach Garibas before dark. We had to stay at Joubari in Nepal. Now you may how I reached Nepal. India and Nepal have no physical border there, and Indians have free entry to Nepal too. We walked approx 13 km that day.

The next morning when I went to brush I had to break a thick layer of ice to get a mug of water. After breakfast we started at 8 approx 7.30 am in the morning. On the way my guide showed me footprints tiger on the snow. I didn’t hat any idea that there is a tiger in this route. On the way, we stopped for lunch. Whatever you want to have is expensive here. Maggie and Wai-Wai is a popular meal here, one pack of cooked Wai-Wai or Maggie will cost you Rs. 40/-. I played a trick here. I gave them 3 packets of Wa-Wai, and told cook two for me and you keep one. That’s a win-win situation for both us. We reached Kalipokhri around 4.00 pm. I checked in a homestay and that cost me Rs. 300/- and Rs. 100/- for food. We walked approx 13 km that day.

We started at approx 8.30 that day because it was just a 7 km hike from there. We stopped at Bikhebhanjan for a tea break. Because from Bikhevanjan hike is going very stiff. What felt it that it was not “just 7 km”. it was hard to walk I had to take several breaks during the hike. I met a few fellow trekkers on the way. Mt. Kancheundzonga was playing hide and seek in every corner.

Finally, I reached the top of Sandakphu around at 12.30 pm, it was almost white everywhere I Iooked.  I checked in a homestay there for  Rs. 400/- and Rs. 150/- for food. If you are planning for Sandakfu trek try to book your stay from GTA Saltlake its jus Rs. 100 And there is no electricity they use generators to generate power. So any electronic gadget you charge its chargeable. It was approx 30to 50 rupees depending on the type of gadgets.

It is one of those places from where you can see 4 of the world’s 5 highest peaks. Yes you can see Mt. Everest 1st, Mt. kanchendzonga 3rd, Mt. Lothse 4th, and Mt. Makalu 5th. 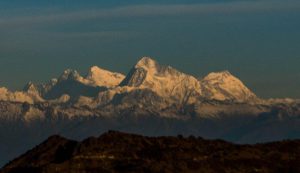 The next morning I woke up at 4.30 am, waited to watch the first ray of sunlight touching those mountain peaks, and gradually it became orange. It was something I can’t describe in words. the Mt. kanchendzonga also called sleeping Buddha. Because it looks like Lord Buddha is lying in an eternal sleeping. 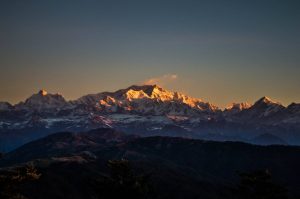 But the day didn’t work as planned. Phalut was 21 km from there was heavy snowfall for the last 2 days. So it’s not possible to go there. But I was adamant to go there. But then I heard that a team tried to do that and they couldn’t go much further. Because the road was covered with 3-4 ft snow. So I decided to listen to my guide.

We started walking at sharp 8.00 am heading for Rimbik. We mate a group of 3 people on the way, one of them was Mexican, We were walking together from there. Our first halt was in Gurdum.  Gurdum itself is a tourist destination and view from there is just awesome.  Our next stop was in Srikhola, I had my lunch there and I played the same tricks there too. But this time I got this for free. After a long 8 hours, a long walked we reached Rimbik at 4.30 pm with a pair of tired legs. It was approximately 28 km from Sandakfu. The next day there was Mountain Marathon Darjeeling route, so I had to go via Mirik.

I took an early morning shared jeep at 5.30 am, and reached NJP station around 12.00 pm and canceled my return ticket as my trip ended 2 days before the scheduled. I boarded a bus to Malda to spend some time with my college friends on the way to Kolkata.