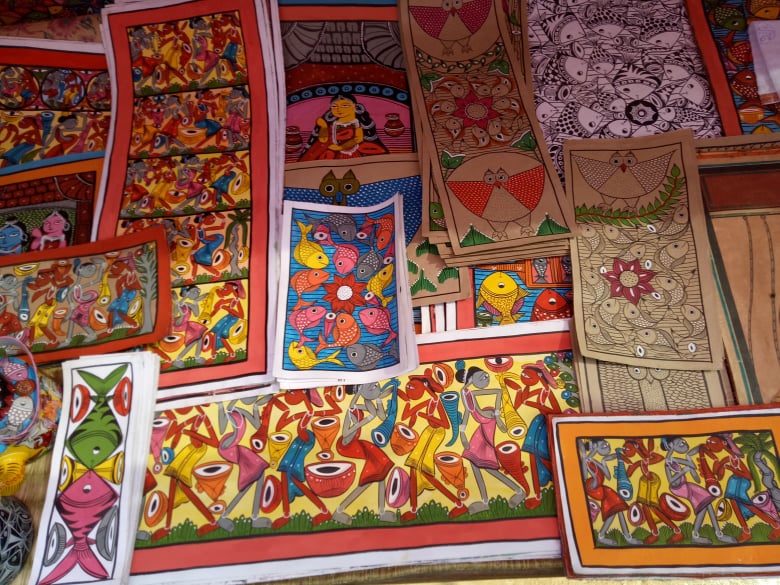 also famous as Patua scroll painting is a traditional delightful art which has a performative nature.

In the first place, the people who do Patachitra drawings is famous as the Patuas or Bengalese ‘paṭuẏā’. In fact, these are the names of an artisan community. These communities live mainly in the states of Bihar, Odisha, Jharkhand and West Bengal in India, and in some parts of Bangladesh.

These communities have both Hindu and Muslim religion people working in it. The Hindu Patuas, to tell the truth, are active in the Kumartuli and Kalighat regions of Kolkata, along with some different parts of West Bengal. The Patuas are maximum from Calcutta region, while in other parts of West Bengal, the rest of them live.

Most importantly. the art forms the Patuas depict that are far and wide, ranging from myths to current social issues. In West Midnapore district in West Bengal, there is a village where around 250 painters or Patuas are living who keep up this tradition alive.

Other than painting, the Patuas also do other jobs or works such as singers and true artists and lyricists and also performers.

Finally, they join these paintings or frames for making of the scrolls.

On the other hand, the paintings the Patuas did vary in different perspective such as mythological texts and scenes, political happenings, oral traditions of folk tales as well as sociological topics of interest.

Additionally, patua scroll performance and its painting is a fascinating affair which ranges from the commentaries of the French revolution to the tales of Hindu deities such as of Radha-Krishna.

Actually, the scrolls which the Patuas prepare usually have different varying size, like in width- 5 to 15 feet and in height or length- 3 to 15 feet.

They generally glue to something like a saree so that there is an ease in storing and unravelling of it.

Furthermore, the traditional form of the works the Patuas do can inspire many styles that were offshoot and is unique truly in all its performing areas.

As a matter of fact, today, for livelihood and to keep pace with the tough times, the Patua painters are also developing many other jobs such as decorating household items and textiles and handicrafts etc.

Additionally, in an effort to sustain themselves economically, the Patua painters now only take to painting, rather than singing by storytelling.

However, most Patuas have converted to Islam from Hinduism. But they practice the customs of both Hindu and Islam. Also, at various points of time, they are Buddhist. The tourists buy these painting scrolls.

To tell the truth, today majority Patuas are insolvent Muslims and they rely mainly on Hindu patronage. Patuas are also familiar as Chitrakar or Patigar too.

Most importantly, the history of the origin of Patuas is very difficult to determine. But according to the historians, it may be from the 13th century.

Actually, the name Patua came from the Bengali word ‘Pota’, which means an engraver. The main work of the Patuas is modelling and painting of Hindu idols, being many of the Patuas, Muslims.

Above all, this is their traditional occupation and they have their own unique community.

Since the Patuas have other names, such as Chitrakar which means a scroll painter. However, to tell the truth, there are many theories which describe the origin of the Patuas. Some of these theories are the Patuas were cast out when they were with their Brahmin priests.

As a matter of fact, the Patuas are one of the tribal groups out of the many tribal groups that live in the Midnapore region. Since the Patuas moved back and forth from different religions like Hinduism, Buddhism to Islam.

Therefore their names are prevailing in both the three religion’s historical or classical literature. When the Patuas looked for patronage, they paid very little attention to faith.

Indeed, the Patuas or Chitrakars had a strategy, which they created during the Sen Dynasty.

In this strategy, they converted others to Islam, so that they could avoid the oppression by the many sub-castes hierarchy.

To tell the truth, every Patuas had two different names, one Muslim name and another one was their Hindu name. This name changing process by the Patuas was an extremely slow process.

In fact, the Patuas mainly started out their profession in the village tradition. They worked as pats who tell the popular mangal stories of the goddesses and gods, and also as the painter of scrolls.

For many generations, the Patuas or scroll painters travelled from different village to village with their pat singing stories or with their scrolls in return for food or money.

The Patuas come mainly from the West Bengal’s Birbhum, 24 Parganas, Midnapore and Murshidabad.

In the first place, they make the scrolls or pats of different or equal sizes of a sheet of paper which they sowed together and also paint them with ordinary poster paints.

Originally the Patuas painted on cloths and told different religious stories like the stories of the medieval mangal poems. Today, to tell the truth, they use these paintings to comment on political and social issues such as the promotion of literacy or the evils of cinema.

However, the origin of the Patas was back to the Mediaeval Hindu society, who obsessed with the property of notions and developed a system of caste-based on the professional hierarchies.

Moreover, Brihad Dharma Purana has a relation about the nine sons of Vishvakarma’s united with a woman of the lower caste.  It is a local belief, that the youngest of the nine sons were the pata painter.

Most importantly, these nine sons or Nabasayakas had to do physical labour in which the eight others improved through professional and other means and their lots socially. But the chitrakar failed to do so and he carried the stigma of his birth alone.

The Pata painting is not a commodity which anybody can sell. Instead, it is a commodity of the hereditary profession. This style is also handing down the generations.

All the paintings have a moral lesson which makes the listeners aware of the virtues and vices of life.

In fact, the style of these painters does not depict any artistic innovation. The training in their handed down style has memorization of lines, poses, set patterns, colours and postures of trends which their forefathers left. The figures which they paint in the front view reveal three-quarters of the face.

Patachitra painting is also well-known as Pata Painting. Pata is a Bengali word which evolved from the Sanskrit word ‘Patta’ meaning cloth. Pata art is of two kinds- one is art on broadsheet of folded cloth and another one is eye-art on a short piece of fabric. The base for pat art is fabric.

Some elements spouted skillfully on the fabrics which are clay, some sticky elements and cow-dung. When it dries up, the fabric becomes tough. But at the same time, mellow enough which helps to sustain the stroke of the artist’s brushes.

They usually draw pictures of religious and symbols that are spiritual, which folk society likes.

In the pata art, Brindaban, Kailas, Oudh and other holy places of the Hindus appear in it.

Moreover, pata art also carried the life sketch of Buddha and his sayings and anecdotes. The Buddhist monks extensively traded these pata arts. After the eight century onwards, the Hindus took over the pata tradition.

Most importantly, these themes of the Hindu pata art were Yama and ten incarnates and loves of Krishna and Yadu and Chandi and deeds of Rama and tale of Gazi etc.

In West Bengal, the Patuas are mainly Bengali speaking communities who have little or no knowledge of the language – Urdu.

Since the Patuas community is strictly endogamous, they prefer marriages between cross-cousin. They usually visit villages and visits from one to house to another with their scrolls that they keep in their bags.

They are paid in kind or cash in return for the services they offer. The Patuas usually offer the services of narrating the stories while unrolling the scrolls.

However, the traditional occupation of the Patuas is image-making, scroll painting and other decorative works. They usually do picture painting on course pieces of cloth which shows the images of Hindu Goddesses and Gods.

Like the other different Muslim artisan groups that are present in India, the Patuas also witnessed a major decline in their traditional occupation. Majority of the Patuas are now working as daily wage labourers.

The Patuas incorporates many folk beliefs being many of them Sunni Muslims.

The Patuas who are involved in making idols are less orthodox generally than other Patuas. The Muslim ritual mark all their ceremonies which are important as well as does painting of Hindu stories in their scrolls. In addition, they also observe many Hindu festivals.

The Patachitra festival is held in the Naya, pingla, West Medinipur of West Bengal. The songs that the Patuas sing along with the unfurling of the painting scroll is famous as Pater Gaan.

The stories which they depict are mainly on modern Indian history. Moreover, there are contemporary issues like preventing the spread of HIV/AIDS, protecting forests etc.

The style of paintings is similar to that of the cave paintings of Harappa and Mohenjodaro and Ajanta.

Some researchers opined that “Patashilpa’ was originally Santhals, a tribal community’s art form.

To tell the truth, the Patachitra was famous among the Hindu tribes like Hos, Juangs, Santhals, Munda and Kherias. The Patachitra painters depicted the birth of PilchuBurhi and Pilchu Haram, who were their first ancestors.

They had seven sons and seven daughters who married each other. During Buddhism time, the Patachitra probably spread to Java, Malaysia, Bali, Sri-Lanka and Tibet.

Since 2004, to rejuvenate the dying art form of Patachitra, banglanatak.com is working with as many as 230 Patuas.

It leads the women empowerment in the community and also it is helping in the reduction of poverty.

With the support of the Ministry of Rural Development, The Eastern Zonal Cultural Centre is supporting promotional activities and capacity building during 2005-2009. Today, living gurus are teaching young people these art forms.

Interaction between new media artists and Contemporary painters from Europe and the Patuas has been facilitated by the European Union. Which has been further supported by Project Ethno-magic Going Global (EGG), an ongoing initiative of banglanatak.com?

In addition to this, health insurance is provided to the families of the artists and to them along with the development of the new Resource Centre at Pingla.

This festival can be reached by car, train and bus. There is no hotel for staying, but the Patuas can house the visitors in their homes on request without advance booking.

Most importantly, local governments along with  UNESCO and various non-government organizations are safeguarding the efforts of the Patuas. These supports from these bodies can help the Patuas in keeping their traditions alive through tough times.

And they are taking many new steps for the benefit of the Patuas.

The Government and the NGO bodies have also in addition to the schemes they provide, collaborated with European Union bodies in the past.

Dating back to a few years, Ethnomagic Going Global projects and government’s push for gaining Geographical Indication. They tag for Patachitra paintings as well as rural crafts and arts.

Moreover, they also give hopes to the Patuas in keeping these folk traditions alive.

Since November 2010, Pot Maya, a festive gathering is held in the Naya village. In this gathering, there is the performance of the ancient folk art for which the enthusiastic and curious art lovers await. Besides that, this gathering is such a soothing one, as it amazes and enthrals all the people present over there.